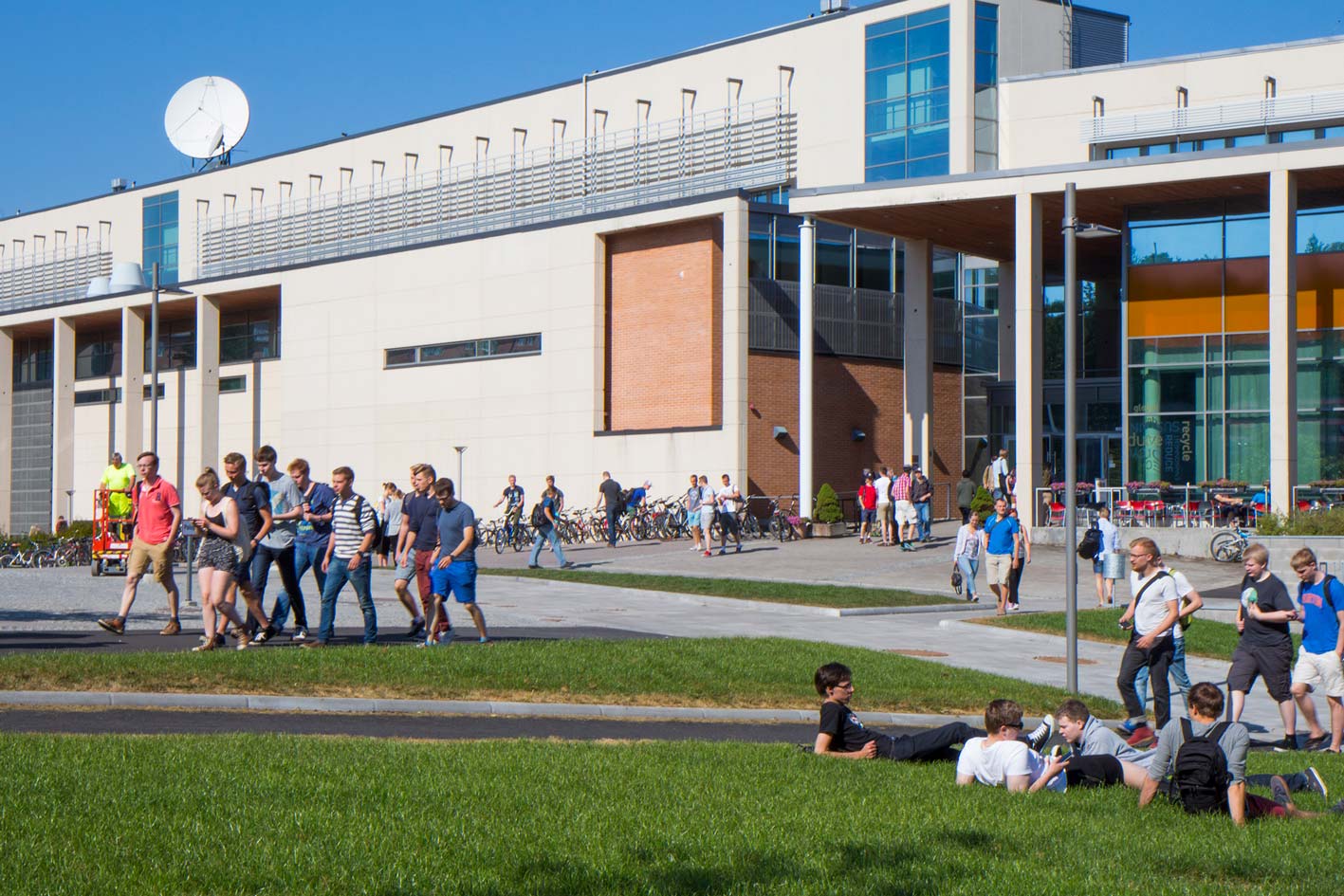 Challenges bring together students and employers: experience at Tampere University

ECIU University offers an opportunity for hands-on, challenge-based learning, the idea being that learners find solutions to real-world challenges in multidisciplinary teams. The challenges are posed by businesses and cities, for whom the ECIU University partnership provides ideas and material for development. The recently concluded City of Tampere challenge looked for solutions to build a carbon neutral city.

ECIU University challenges are solved in interdisciplinary teams that are often international as well. Open to students of all ECIU member universities, challenges can be selected not only from Tampere, but also from universities in Norway, Ireland, Germany, France, Italy and Spain, among others.

The challenge: with your team, come up with a data- or software-driven solution related to transport or the built environment that will help the City of Tampere achieve its goal of carbon neutrality – and attend lectures to gain the necessary understanding of the topic.

The outcome: you will gain experience of multidisciplinary teamwork and problem-solving, build your capacity in a practical manner, earn five credits, and your work can end up having a real impact.

This is a recent example of the challenges that are completed at the ECIU University. Launched at the end of 2019, the Europe-wide network of 13 universities is creating a challenge-based, cross-border education model where learning happens by solving real problems in society. The challenges are completed at the network’s universities but are set by businesses, cities, and other societal actors. Participation is open for students at any member of ECIU University with a wide range of hybrid and online implementation options.

“In the latest challenge at Tampere University, students were also given the opportunity to participate in a virtual reality-based collaboration experiment. Members of the participating teams were given VR glasses and they met at least once a week “face-to-face” in a virtual reality service. A virtual XR Campus has also been created for ECIU University which will be launched soon. For example, when tackling urban challenges, it is valuable to be able to see the city around you as realistically as possible,” says Associate Professor of Information Management Henri Pirkkalainen who was one of the challenge leaders.

Tackling the challenges is multidiciplinary and linked to teaching

In practice, ECIU University challenges are carried out by forming multidisciplinary teams of participants that seek solutions to a given problem guided by the challenge leaders. The teams usually work for 3–4 weeks, and the client is involved in the process, supporting the development of ideas, and giving feedback to the teams. At the end, the teams present the results of their work, which happened in the most recent challenge at start-up house Platform6. The students thus received feedback not only from the City of Tampere, but also from the Tribe start-up community.

In addition to the challenges, ECIU University also offers short micro-modules that students can complete to increase their understanding of the topics central to the challenges. However, some of the challenges are linked to a specific university course, in which case participation automatically means completing the course.

“For example, this latest challenge from the City of Tampere was linked to our Data and Software Business course because solving it required a certain basic understanding of, for example, data-driven services, their business aspects and productisation,” Pirkkalainen explains.

So far, ECIU University's challenges have focused on the UN Sustainable Development Goal on sustainable cities and communities. The problems to be solved have thus been related to the development of public transport, the circular economy transition, using smart technologies, and sustainable urban planning. However, the challenge topics are soon likely to significantly expand as the pilot on challenge-based education moves forward.

“Even though so far, many of the challenges have had a more technology-driven perspective, the basic idea of the challenges is that we really want to involve students from different backgrounds. The search for functional solutions also requires an understanding of, for example, human behaviour and marketing,” Pirkkalainen points out.

What kind of solutions have been invented in the ECIU University challenges, then? One example comes from the Smart streetlights team in the latest challenge, which included students Efe Acikalin, Halistya Zahra, Mallikarjun Peddamudium, Miika Hokkanen and Vijay Sadananda.

“We developed an algorithm that adjusts the brightness of streetlights according to the amount of natural light in the environment. Our aim was to reduce the energy consumption of streetlights in a way that requires as little employee involvement as possible,” Zahra says.

“We got the idea from laptop and mobile phone screens that adjust their brightness and started wondering whether the same idea could be applied to streetlights,” Peddamudium adds.

Zahra and Peddamudium became interested in the ECIU University challenge because they saw it as an opportunity to develop their entrepreneurial skills and challenge themselves to innovate something that could be truly useful. The challenge, which differed a lot from regular course assignments, was very enjoyable to both, and coming up with creative ideas was one of the best aspects of the process. Miika Hokkanen also says that solving a real-world challenge made participation interesting.

“The challenge also taught us crucial skills on how to develop a solution for a specific need and how to monetise your idea effectively,” Hokkanen says.

The Smart streetlights team was most excited about the pitching event at the end of the challenge and about possibly developing their innovation further. Pirkkalainen, who led the challenge, explains that the City of Tampere’s challenge was one of the first to pilot ECIU University’s €5 000 follow-on funding, which students interested in further developing their ideas can apply for.

“Many students naturally attended the course for the sake of earning credits and a good study experience, but we wanted to offer this carrot to those who might be genuinely interested in further developing their idea,” Pirkkalainen mentions.

After these interviews, it turned out that the Smart streetlights team was selected as the first recipient of the follow-on funding.

According to Pirkkalainen, challenge-based learning can be particularly rewarding for students because it is not overly theoretical, and their ideas can have real-world meaning. The challenges also have the advantage that they allow collaboration with students from other disciplines, businesses, and cities. On the other hand, for those providing the challenges, the challenges are useful because they serve the development work that the organisation would do in any case.

Max Liikka, coordinator of university co-operation at the City of Tampere, agrees.

“In the ECIU University challenges, we have been able to bring the city’s acute problems to student groups to consider. In all the challenges, we have had several groups, which has been good because some ideas may overlap, and we may have already tried out some of them. It has also been nice to have international groups of participants because international students bring new perspectives that we might not have thought of before,” Liikka says.

“The solutions generated in the city’s challenges have not been directly put into practice yet, but they have been used as part of the development of our activities,” Liikka adds. This is partly since things move at a relatively slow pace in the city.

“Ideas that emerge from short challenges are not usually ready to be implemented as such, but they have given us food for thought,” Liikka mentions.

Overall, Liikka says that ECIU University has provided a ready-made, fluently organised concept that is easy for the challenge-provider to join. Pirkkalainen also brings up an aspect that, for example, businesses might be thinking about. The challenges are a way to find motivated people, meaning that among the other benefits, they can be a potential channel for recruiting new employees.

Tampere University is one of the most multidisciplinary universities in Finland. Almost all internationally recognised fields of study are represented at this university. Combining world-class research and innovation activities; Multidisciplinary learning and lifelong partnerships; Unique expertise in developing applications that benefit industry, business and the public sector.